Eight Eisner awards. Two Emmy nominations. Four screenplays in development. Writer Brian K. Vaughan has succeeded in every medium he’s worked in, but don’t mistake it for natural talent. Starting in his senior year of high school, Vaughan knew he wanted to be a writer, and wrote five pages every day. His advice for aspiring writers?

“Write more. Do other stuff less.” 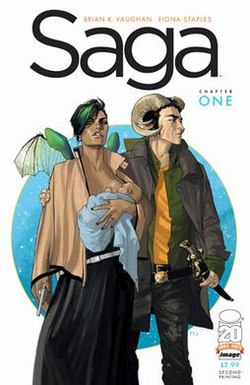 In university, Vaughan spent every second he could writing. When he wasn’t working on his original work, he took classes at the “Stan-hattan Project”, an initiative by Marvel Comics searching for new talent. His dedication lead to him getting the opportunity to rewrite dialogue, which segued into being a fill-in writer for time-pressed editors, which eventually lead to him getting his big break on the indie darling Y: The Last Man.

Winner of five Eisner awards (the graphic novel equivalent of an Oscar) he was approached by the writers of Lost to contribute to their show. Flitting back and forth between his indie works and writing for television, Vaughan is one of the only comic book writers who is a bona-fide superstar. His current book, Saga, drawn by Fiona Staples, gives a modern and adult look to sci-fi fantasy. Highly regarded as one of the best comics on the market today, it’s even more special that Vaughan completely owns the intellectual property with his artist. Many creators in comics may find the rights tied to the company that publishes their work.

Dedication was important in Vaughan’s success, but it wasn’t everything. The former Batman scribe learned how to ignore distractions by focusing on the end goal. Giving into distractions is like having candy for dinner – a fun treat, but completely unsustainable. Vaughan’s university experience may have had less glamour than others, but by graduation he had reached his end goal, and had his foot in the door to being a professional writer.

“Every writer has ten thousand pages of shit in them, and the only way your writing is going to be any good at all is to work hard and hit ten thousand and one.”

If you, like Vaughan, have a huge workload ahead before your dreams are attainable, break it down. Ten thousand pages seems insurmountable, but a fraction of your end goal a day can be fit into your schedule. Follow your passion more, do other stuff less.